Hossein Ali Amiri, the secretary and spokesman for the Interior Ministry’s election headquarters, says 10 women have registered their names to run for a spot in the Assembly of Experts. 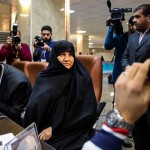 Amiri announced on Wednesday December 23, after registration closed for the assembly elections, that 619 people in total have nominated themselves to run in the election, and 10 of those are women. Five women are reportedly running in Tehran, two in Fars, two in Isfahan and one in Zanjan.

This is the first time that women are stepping into the Assembly of Experts election arena.
Amiri reported that of the nominees, 72 have PhDs, 73 have master’s degrees, 39 have bachelor’s degrees and four have associate degrees. More nominees are in the age group of 50 to 55 years than any other.

A group of women’s rights activists has launched a campaign to “change the male face of Parliament” by encouraging more women to run for office.

The Assembly of Experts and parliamentary elections will run simultaneously in March of 2016.