Officials in the Saudi judiciary have transferred jailed blogger Raif Badawi to another prison, and his wife reports that her husband is protesting the move with a hunger strike. 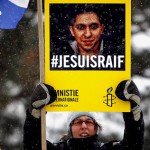 The German News Agency reports that Saudi authorities cited “administrative issues” as the reason for the transfer.

Badawi, 31, has been in prison for three years and has endured 50 lashes to date.

The sentence was approved by the appellate court in June.

On October 29, the EU awarded Badawi with the Sakharov Prize for Freedom of Thought, which his wife accepted in Strasbourg.