A 60-year old porter from Marivan was killed by a landmine on Tuesday December 8. 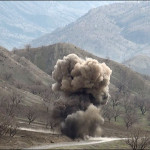 The porter was reportedly returning from the Bashmagh border when he stopped to rest and set down his load, triggering the explosion.

The latest statistics show that six million hectares of Iranian soil is contaminated with landmines and 20 million mines still remain in the western and southwestern regions of the country, without any adequate government plan to rid those region from this daily threat to the lives of residents.

West Azerbaijan, Kurdistan, Ilam, Kermanshah and Khuzestan are the provinces most affected by landmines left from the Iran-Iraq War of the 1980s.