An Iranian security officer was killed by a bomb explosion in the mountainous regions of Sistan-Baluchistan in southeastern Iran. 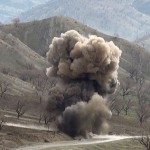 IRNA reports that Hossein Rahimi was killed by an explosive booby trap while he was on duty on Wednesday December 9.

The report adds that several other officers were injured in the explosion.
The officers were from the Nikshahr Police Station, 510 kilometres south of Zahedan, the provincial capital.

In November, a roadside bomb struck a police vehicle in the region, injuring several other officers.

Sistan-Baluchistan has seen many violent attacks in recent years related to the militant Baluchi group Jesh-ol-Adl as well as bandits who smuggle.