Iran’s Health Minister Hassan Hashemi has reported 22 deaths in the country due to the flu.

On Sunday December 6, the minister told Mehr News: “After all, there’s always been flu and cold seasons like now, and other than prevention, there is nothing else needed to be done.” 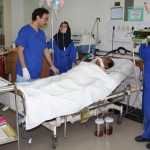 “Every year, the flu illness takes a death toll, which is registered, and last year we had similar numbers”, he added.

Ali Akbar Sayyari, Iran’s deputy health minister, told ISNA there are about 65 cases of flu in Iran. He tallied up 12 deaths in Kerman, four in Sistan and Baluchistan and four in Rafsenjan.

Mohammad Mehdi Gooya, the head of health ministry’s Centre for Infectious Diseases, set the number of the deceased in Kerman at 16.

He said the number of infected people in Kerman and Sistan-Baluchistan is higher than in other provinces, and the illness is expected to spread in other parts of the country.

He also elaborated that the 16 patients in Kerman were under medical care in hospitals but their treatments had failed due to underlying diseases.

Abolghasem Seyfolahi, the deputy governor of Kerman Province, has spoken of creating a crisis force in the province: “The virus has spread most in the north and east of the City of Kerman.”

MP says political activity should remain open to all