The Mazandaran Department of the Environment has arrested 22 “illegal hunters and hunting offenders” at the Minkaleh Wildlife Sanctuary. 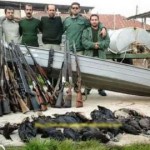 IRNA reports that the offenders had 34 bird carcasses, 22 hunting rifles and a boat, all of which have been confiscated. The detainees have been handed over to the judiciary.

There are 20,000 Mazandaran residents with hunting licences, but official reports indicate that about 100,000 people engage in illegal hunting there.

The Department of the Environment reports that in the past six months, illegal hunting in Iran has increased by 55 percent.

The Department of the Environment maintains it lacks the funding to pay for public education programs and protective measures to safeguard the endangered species.