Iran’s Coordination Council of the Reformist Front has called on the judiciary to take the necessary steps to prevent the disruption of speaking events across the country. 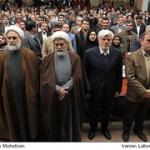 ILNA reported on Thursday December 3 that the council issued a statement calling for “compliance with the law by all institutions; maintenance of the security of forums and meetings and public confidence” especially in the lead-up to the parliamentary and Assembly of Experts elections.

The council also calls on the ministry of the interior to live up to its duty to “provide for the public’s safety and have an action plan in case such incidents recur”.

Speaking events organized for a number of reformists across the country have been cancelled or interrupted by groups of hecklers or attackers in the past month.

Parliamentary and Assembly of Experts elections will be held in March, and conservative factions appear to be hard at work trying to prevent reformists from getting any foothold in the two important government bodies of the country.