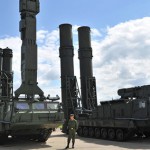 TASS reports Kozhin confirmed that “The contract is in action” and that the delivery has begun. Meanwhile, Iranian ambassador to Russia Mehdi Sanai confirmed in late November that Iran has received the first S-300 system.

Russian President Vladimir Putin had earlier lifted the ban on the sale of the defence system to Iran.

Although the agreement to purchase the defence system was signed back in 2007, in 2010 then-Russian president Dmitri Medvedev put a ban on such sales in accordance with international sanctions against Iran.

Following the finalization of nuclear agreement between Iran and the 5+1, Russia announced that it will now go through with the agreement and deliver the defence systems to Iran.

Washington newspaper fears for health of reporter jailed in Iran