A bus that was carrying 19 Iranian pilgrims from Iraq to Iran plunged off a cliff, leaving seven people dead and five others seriously injured. 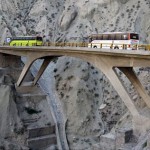 IRNA reports that the bus fell down a cliff and, according to the spokesman for emergency services, another seven passengers fell in the river and are currently missing.

The accident occurred on the Haraz Road on Wednesday December 2 in the afternoon local time.

Emergency services reports that in the past 10 days, 14,000 Arba’een pilgrims have received rescue and medical services.

Thousands of Iranian pilgrims travelled to Iraq on the occasion of Arba’een, the Shi’a ceremony which marks the 40th day of the passing of Imam Hussein with a visit to the Karbala.