Rasoul Khadem, head of Iran’s Wrestling Federation has called for an investigation into the cancellation of Tehran Symphonic Orchestra performance in the closing of World Wrestling Championships. 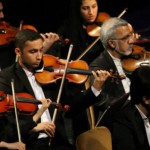 Khadem wrote to the Ministry of Culture and Guidance said the federation had invited the orchestra to play the national anthem in the closing ceremony of the competitions and all necessary permits had been obtained but the orchestra was prevented from entering the venue.

Khadem insists that there are no regulations preventing presence of women in stadium as performers.

The orchestra was prevented from performing in Azadi Stadium yesterday because of the presence of women in the orchestra.

Ali Rahbari, the orchestra’s conductor who was only informed of the matter 15 minutes prior to the performance refused to exclude the women performers from the orchestra and described the treatment as an insult.

Khadem writes that the Symphonic Orchestra has also been invited to perform the national anthem in the Takhti Cup in February. He urged the Minister of Guidance to take all the necessary steps to avoid any obstacles regarding the performance of the orchestra in the sports ceremonies.