A performance by the Tehran Symphony Orchestra to open the World Wrestling Club competitions was cancelled after the conductor refused to accept a last-minute demand to remove all female musicians. 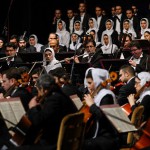 Conductor Ali Rahbari told ISNA on Sunday November 29 that the orchestra members were preparing to perform the national anthem at Azadi Stadium when they were informed that women were not allowed on stage.

“I was very upset and said I would not endure this insult,” Rahbari said: “We would either perform together or leave.”

He said negotiations did not yield any resolution, so the orchestra had to leave without performing.

In recent years, conservative factions have tried to prevent women from performing in concerts in cities across the country; however, this is the first time that the conservative backlash has affected the capital.

Iranian fishing crew escapes after being held captive by pirates