An Iranian MP wants Parliament to follow up on reports that Saeed Mortazavi, the former Tehran Prosecutor who is under investigation for fraud and his involvement in the death and torture of prisoners, has left the country. 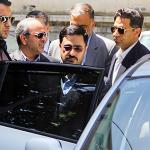 A number of Iranian news sources report that Mortazavi left the country on Thursday November 26. He has reportedly gone to Karbala for the Arbain ceremony.

Mortazavi faces court proceedings over accusations that he embezzled from the social security fund and ordered the torture of prisoners that led to at least three deaths.

Seyed Hossein Dehsashti, the Abadan MP, told the Khaneh Mellat website that Mortazavi is banned from leaving the country because of the fraud charges against him and he should not have been allowed to leave the country.

He stressed that the judiciary, the Interior Ministry and security bodies should be held accountable in this matter.

Last week, the spokesman for the judiciary stressed that Mortazavi has not eluded the justice system and “that certain charges against him are still being investigated and some have even resulted in court orders.”

Iranian fishing crew escapes after being held captive by pirates