A fire in the Noor Forest of Mazandaran has burned down over 20,000 hectares of trees and the fire has not yet been brought under control. 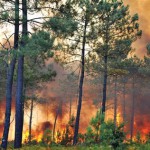 The Noor Governor told IRNA on Saturday that the persistence of the fire has become cause for serious concern and he urged the government to provide a helicopter to assist in the fire extinguishing efforts.

The report adds that the rocky terrain, with cliffs drops of 1.5 km, is seriously hampering firefighting efforts.

The head of Mazandaran Provincial Emergency Response says a helicopter was dispatched from Alborz Province, but technical difficulties prevented it from transferring water.

The forest is part of the1.9 million hectares of Hircanian Forests that stretch from Astara in northern Gilan to GIldagh in western Golestan Province.