Two hundred to three hundred Iranian pilgrims traveling to Iraq have been detained and returned to Iran for failing to produce any visas, according to the Tasnim News Agency. 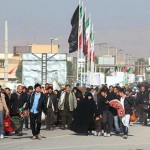 The head of Iran’s Pilgrimage Organization said those who entered Iraqi territory without a visa have been returned to Iran.

Ilam provincial authorities also report that 200 Afghan nationals who were travelling on a pilgrimage to Iraq have been returned to Iran because they did not carry the necessary visa.

Iran’s Pilgrim’s Organization said by Thursday over one million Iranian pilgrims had gone to Iraq. They report that two million Iranians have applied for a visa over the internet, and so far 1.3 million visas have been issued.

It has been announced that it is not possible for Iraqi authorities to issue the visa at the border and visas must be obtained prior to travelling to Iraq.

Turkey arrests journalists who exposed shipments of arms to Syria