Environment official points to severe plight of birds in Iran

A spokesman for the Department of the Environment has raised the alarm about birds in Iran, saying many species in the country “are severely endangered”. 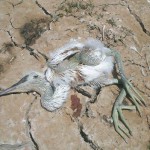 Esmail Kahrom told IRNA last week that the drying out of wetlands and lagoons across the country has had a seriously adverse effect on the bird population.

The Department of the Environment reports that anywhere between 50 and 90 percent of 40 lagoons across the country has dried out due to continual drought conditions, unregulated dam building and the overexploitation of water resources.

The drying out of lagoons has had serious effects on the ecosystem, including the loss of birds and other species that depend on these water bodies.

The Houbara bustard, the black cock and several species of duck, goose and crow are reportedly on the verge of extinction.

The latest studies report that 535 different bird species live in various parts of Iran, and in addition, five million to six million migratory birds enter the country each year.

Reports indicate that each year at the time of this migration, illegal hunters from neighbouring countries, especially from Persian Gulf countries, pay exorbitant sums to go hunting for rare birds.

Turkey arrests journalists who exposed shipments of arms to Syria