The head of Iran’s Pilgrimage Organization announced that the group has identified the remains of a former Iranian ambassador to Lebanon, Ghazanfar Roknabadi, as one of the victims of the Mena disaster in Saudi Arabia. 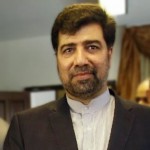 Roknabadi’s relatives have traveled to Saudi Arabia, where fingerprinting and DNA testing have finalized the identification of the remains, and they have confirmed his death.

On September 24, at least 1,100 pilgrims in Mena, outside Mecca, were killed in an stampede on the roads dividing the pilgrim tents. Close to a thousand were also injured. The fatalities included 456 Iranians.

Iranian authorities have pointed the finger at Saudi authorities for their failure to provide adequate security for the pilgrims and also described as “suspicious” the disappearance of a number of Islamic Republic officials in this incident.