Lorestan authorities announced that overuse of water reserves has completely dried out 1500 aqueducts in the province. 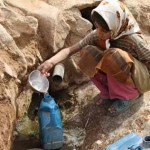 Boroujerd prefect told IRNA on Wednesday November 25 that persistent drought conditions over the past 17 years and the drop in precipitation coupled with overuse of water resources has depleted all underground waters in the province.

Large areas of Iran have been under drought conditions for at least the past 15 years causing serious decline in water resources.

Iranian authorities report that at least 500 cities across the country are in crisis in terms of their water supply.