Iran and Russia signed seven memoranda of agreement on the sidelines of the Gas Exporting Countries Forum in Tehran. 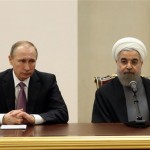 The member states at the GECF summit agreed upon a ten-article resolution regarding production limits on natural gas and announced that the Republic of Azerbaijan has joined the forum.

Ayatollah Khamenei lauded Russia’s stance toward “regional matters, especially regarding Syria” and he added: “The U.S. always tries to push its competitors into a weak stance, but you [Putin] have defused this strategy.”

Iranian President Hassan Rohani thanked Putin for his visit and said Iran and Russia are serious about the fight against terrorism, unlike so many other countries that merely make “false dramatic gestures”.

Putin said Russia is preparing a list of goods required for each country and it will establish trade in those goods using their national currencies. He added that Russia will offer Iran a $5-billion line of credit.

The Russian Minister of Energy has said that annual trade between Russia and Iran will increase from $1.6 billion to $10 billion.