Filmmaker among those arrested in recent sweeps

Mohammad Nourizad, an Iranian filmmaker and activist, was arrested on the morning of Saturday November 23 in front of his home, according to reports from Iran. 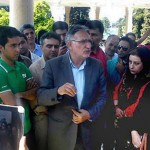 Nourizad was on his way to the Dena Tyre store, where families of political prisoners and other activists gather each Monday to demand the release of prisoners.

Nourizad had reported about the arrest of the protesters on Saturday on his Facebook page.

Rivers redirected to save Iran’s biggest inland lake from vanishing