A number of protesters were arrested by Islamic Republic authorities on Saturday November 21 in front of Evin Prison in Tehran. 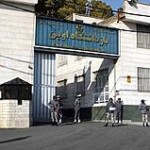 The Human Rights Reporters News Agency reports that police arrested the protesters in front of Evin Prison and transferred them to various detention centres.

The report indicates that the detainees were transferred to different locations after being taken for questioning at Evin Court.

Eyvazzadeh was reportedly sent to Varamin Prison, Mohsen Shoja and Ali Taheri’s other students were taken to the Revolutionary Guards ward of Evin Prison. The whereabouts of Reza Maleki and Hashem Zainali are currently unknown.