A gas explosion in the Pardis neighbourhood of Ahwaz demolished two residential units on Monday November 16 at around 11:33 PM. 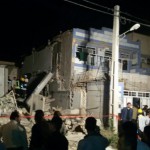 IRNA reports that while there are no accurate reports of damages and casualties, some reports claim four people were killed in the incident.

The Ahwaz Fire and Safety Services told Mehr News Agency that the two units were completely destroyed and the intensity of the explosion shattered windows in buildings 11 metres away.The report adds that the body of a woman was pulled from the rubble.

ISNA also reports that Khuzestan Medical Emergency Services has confirmed that a 60-year-old woman was killed in the incident and another three people were injured.

The rescue operations have reportedly been hampered by local residents overcrowding the street.
Ahwaz Fire and Safety Services is reportedly investigating the cause of the explosion.