Iran cracks down on illegal wells to protect water sources

The head of Tehran Waterworks says 600 illegal wells in the province have been blocked and 1,400 more will be blocked by March. 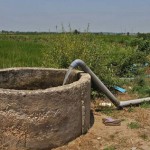 Khosro Erteghai told ISNA on Sunday November 15 that the blocking of these wells is aimed at protecting Tehran’s underground waters. He reported that the plan will save 70 million cubic metres of underground water resources.

The report indicates that the Varamin and Shahriyar fields are the chief targets of this plan as the they have been most affected by the excessive exploitation of underground waters.

In recent plans national development, 11 fields in four provinces are under serious review due to ebbing waters.

Minister comments on “enemy infiltrators” and bombing in Beirut