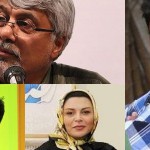 An unidentified fifth individual was also arrested at the same time. Some reports indicate the fifth detainee may be Nezar Zeka, an IT specialist with both Iranian and U.S. citizenship. The Fars News Agency, which is linked to the IRGC, has alleged that Zeka was connected to U.S. intelligence services and was in the process of organizing protests in Iran.

Iranian President Hassan Rohani reacted to the so called anti-infiltration projects of the IRGC as soon as the arrests began, saying the invocation of “the enemy’s infiltration plans” should not be used to silence opposition. While he has condemned the arrests and promised to look into the matter, so far his administration has not been able to make any headway on that promise.

Analysts say the arrests appear to be a prelude to media suppression expected in the lead-up to the parliamentary elections in March.