The Iraqi Peshmerga launched an offensive in northern Iraq on Thursday November 12 to retake Sinjar from ISIS forces. 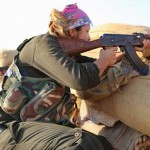 CNN reports that the attack is backed by the international coalition air strikes.

The Kurdish Region Security Council confirms that over 7,500 Peshmergas are involved in an attack from three directions on Sinjar against ISIS forces.

ISIS took over Sinjar in August of 2014 and, according to Izadi survivors, killed hundreds of people and captured women to serve as slaves to ISIS soldiers.

The objectives of this offensive have been listed as the capture of Sinjar and strategic routes and the establishment of a buffer zone to portect the city and its residents from ISIS shelling.