Floods in Hormozgan Province have killed 12 people and left many more injured. 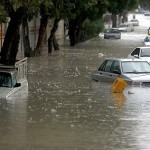 The Governor of Hormozgan also reported that the volume of water in Minab’s Esteghlal Dam, which had been critically low, has reached 10 million cubic metres.

Schools were closed in various parts of Hormozgan and Fars provinces on November 1 due to the heavy rains.

Meanwhile, the Tasnim website reports that with floods wreaking havoc in 10 provinces, the Red Crescent says it has so far provided rescue and emergency services to close to 4,000 people and relocated 170 households.

The Red Crescent also reports that in Taibad, a vehicle with four people inside was washed away, and efforts are reportedly underway to find them.