Islamic Republic extremists attacked and halted the speaking event of Fayyaz Zahed, a professor and reformist figure in Lajihan on Wednesday November 4. 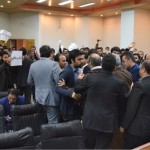 The Diyar-Mirza website reports that the event was being held on the occasion of National Student Day in Iran, and a group of intruders chanting “death to seditionists!” kept it from proceeding.

Zahed told ILNA that his event had all the necessary permits from the Lahijan Governor’s office to be held at the Open University, and after being rejected by the university administration, it was transferred to the Lahijan Chamber of Commerce.

He reported that when the hecklers arrived at the event, he left the building, but they followed him and beat up some of the young men trying to protect him. He added that some of his guards ended up in the hospital.

The report adds that the assailants had even blocked the road and were trying to prevent Zahed from leaving the city.

As Iran’s parliamentary elections draw near, many reformists are being targeted by extremists for organizing any form of outreach to the public.

Detained activist warned not to talk to foreign media