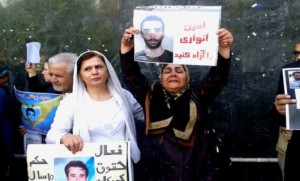 Farah Bakhshi, Anvari’s mother, reported that her son was released on bail of 500 million toumans. Bakhshi thanked everyone who had supported her and her son and she called for the release of all political prisoners.

Anvari was arrested on October 3. His mother told Zamaneh she was denied any form of contact with her son because she had taken part in protests for the release of political prisoners.

Anvari, 21, is a fifth-year student of computer software at Amir Kabir.

Last December, he was briefly arrested over accusations of “propaganda against the regime, and insulting the Leader as well as Mohammad Taghi Mesbah Yazdi on Facebook.” He was given a sentence of two and a half years in jail, which was suspended for five years.

Mesbah Yazdi is an influential conservative member of the clergy. He is a member of the Assembly of Experts and the Supreme Council of the Cultural Revolution.