Acid rain sent up to 7,000 people in Ahwaz to hospital with respiratory problems by the end of the day on Friday October 30. 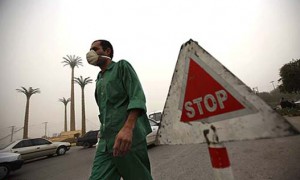 The Etemad daily reported on Saturday October 31 that acid rainfall over the past two days in Ahwaz sent 3,000 people to the hospital with breathing problems.

Government officials have reportedly denied the phenomenon of acid rain for the past two years and deny that the respiratory problems are linked to it.

Khuzestan crisis management says “metal pollution, the burning of sugarcane farms, the burning of tires and waste, and pollen” are the four main causes of the breathing problems.
Hospital officials say the cause remains “vague”.

Etemad says that for two years there has been no special supervisory group assigned to improve the situation, and the main reason for these breathing problems remains unidentified.
On Wednesday, one Ahwaz resident died as a result of air pollution and possible effects of acid rain.

Ahwaz reportedly has the highest level of pollution in all Iran.