The Iranian Women’s National Futsal team may be unable to compete in the 2015 World Tournament even though they won the championship in Asia. 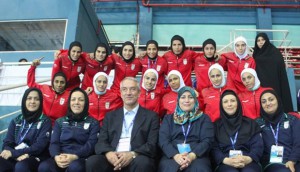 The Iranian federation says the team has begun practice; however, securing visas for all team members is a difficult task, which may keep them from joining the games in Guatemala.
The women’s team did not take part in the futsal cup games hosted by Colombia for similar reasons.

After the team won the Asian Cup, Ali Kafashian, the head of the Iranian Federation, announced that the team would compete in the world championships in Guatemala this year.

The head of the women’s football committee, Elaheh ArabAmeri, was quoted as saying that Guatemala does not have a consulate in Iran, so they have to travel to another country to get visas. She adds that if the team announced that it would participate in the games and then fails to go due to visa problems, it will be penalized by FIFA.

The deputy head of the federation has also cited the long distance of the trip as an impediment to the team’s participation in the games.

The Shargh daily has criticized the federation’s excuses, saying: “It smells of a lack of funds and weakness of diplomacy”.