Heavy rainstorms in Ilam have claimed three lives, and another person is currently missing. 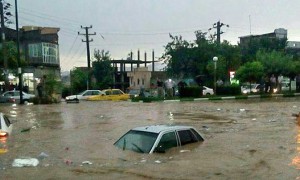 IRNA reported on Thursday October 29 that according to the head of the provincial emergency services, heavy rainfall has flooded many parts of the province and the rains continue to fall.

The central regions of the province have reportedly received 230 mm of rain in the past 24 hours.

The rainfall is reportedly becoming more severe and has resulted in the closure of schools and banks and flight cancellations.

The southern wall of Konjachem historic castle has also been reportedly destroyed by lightning and further damaged by the persistent rain.

Weather stations had been predicting heavy rain since the beginning of the week.