Omid Yousefi, the head of Wildlife Monitoring and Environmental Protection for Western Azerbaijan, has reported that 1,500 birds of various species have been found dead around Lake Urmia in recent weeks, and the cause remains unknown. 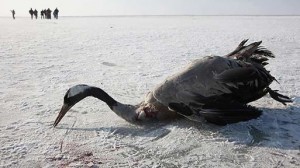 The Mehr News Agency reports that Yousefi said on Tuesday October 27 that scores of coots, cotton pygmy-geese and mountain cocks were found, and the investigation continues into what killed them.

He said avian flu, which was at the top of their checklist, has now been ruled out. He added that high concentrations of wastewater from factories and industrial towns around Lake Urmia may be affecting the birds’ landing grounds and poisoning the birds.

He added that his office is setting up field clinics to try and save as many birds as possible.
The rapid drying out of Lake Urmia in recent years has seriously affected the wildlife in the region. Salt storms, the loss of vegetation and the prevalence of skin disease are among the effects triggered by the drying of Iran’s largest inland lake.