Fatemeh Piroozi of the Agriculture and Natural Resources Research Center of Lorestan reports that dust storms are seriously compromising the Zargos forests. 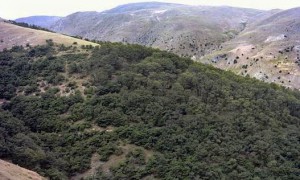 Piroozi told ISNA on Monday October 26 that the persistence of dust particles in the air has caused serious problems for Zagros forests, like reducing the flow of sap, which weakens the vegetation and makes it more prone to various forms of pests.

“The persistence of dust particles on the foliage of Zagros trees has reduced the trees’ metabolism and created a condition similar to poisoning,” Piroozi said.

She reported that the shape of oak leaves makes them more vulnerable to the dust particles and more likely to absorb them, causing a plethora of problems for the trees.

Oak trees are the most prevalent trees in the Zagros region.

Iran has been grappling with the problem of dust particles in recent years. Dust storms from neighbouring countries and dried-out regions in the west have created serious climate problems in the west and are steadily extending their reach.