Three people were killed by a landmine explosion in the border region of Khuzestan and Ilam province on Saturday October 17. 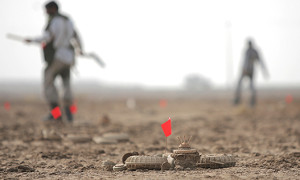 The Fars News Agency reports that three residents of Zaan Village inadvertently entered a mine-infested area and were killed by an explosion.

An eyewitness reports that the three victims had been collecting iron scraps.

Valid Satkin told reporters: “Hardship due to severe unemployment with the decline of agriculture due to the lack of water has forced some residents in recent years to turn to collecting iron scraps.”

The report adds that death from landmine explosions has become a common occurrence in the area.

Over six million acres of Iranian territory is infested with more than 20 million landmines, mostly remnants from the Iran-Iraq war of the 1980s.

The most affected provinces are the western provinces of Western Azerbaijan, Kurdistan, Ilam, Kermanshah and Khuzestan.