A Mahan Company Boeing 747 passenger plane carrying travellers from Tehran to Bandar Abbas was forced to make an emergency landing after an unprecedented situation that saw parts of the plane fall off. 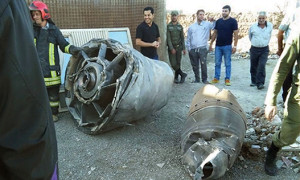 Those part fell from the sky around Eslamshahr after the plane took off from Mehrabad Airport on Thursday October 15.

Reports indicate that portions of the engine were included in the lost parts.

The plane reportedly returned to Mehrabad after 40 minutes of flight due to technical difficulties, and its 426 passengers were transferred onto two other planes headed to Bandar Abbas. No injuries were reported from this incident.

In March, an Iranian Airbus exploded while landing at Turkey’s Ataturk Airport. That incident also resulted in no injuries.

Iran’s airlines have aging fleets due to the continued international sanctions against selling planes and airplane parts to Iran.