The Iranian Parliament approved the nuclear agreement drafted in Vienna between Iran and the 5+1 in a highly contentious session on Sunday October 11. 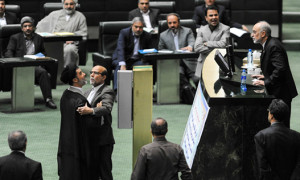 Salehi and Zarif were reportedly attacked and threatened with execution by some critics of the nuclear agreement in Parliament.

IRNA also reported that three MPs attacked the podium at two points when Ali Akbar Salehi was addressing the session and tried to prevent him from continuing his speech but they were stopped by other MPs.

The report adds that three MPs remained beside Salehi for the rest of his speech to protect him from any further attacks.

IRNA stated that despite the attacks, a number of MPs thanked the head of Iran’s Atomic Agency after his speech and reassured him of their support.