The sudden increase in the volume of air pollutants in the city of Mashhad on Thursday October 8 put the country’s second-largest city on alert. 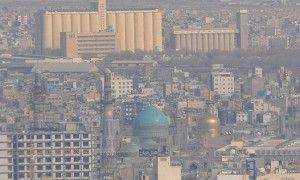 A PSI (pollutant standard index) reading of 50 to 100 is considered moderate and from 100 to 200 is unhealthy.

According to Salehi, the air in Mashhad has never before reached this level of pollution.

Salehi added that patients suffering from cardiovascular and respiratory complications, children, pregnant women and other vulnerable groups have been advised to avoid going outside as much as possible.

Mashhad has a population of 3.5 million with one million vehicles frequenting the city roads each day.