Thousands of football fans gathered at Azadi Stadium to bid farewell to Persepolis captain Hadi Noroozi, who passed away suddenly on Thursday following a heart attack. 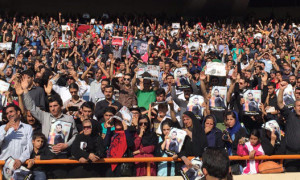 Close to 20,000 people attended the ceremony at the stadium in Tehran on Friday October 2.
The 30-year-old football player suffered a heart attack on Thursday and passed away after a brief coma.
Although Iranian women are banned from attending sports events as spectators in stadiums, both men and women were in the crowd bidding Noroozi farewell in Azadi Stadium.

Noroozi’s remains will be taken to Babol on Friday night and he will be laid to rest in his hometown.