The number of Iranian pilgrims killed in the incident at Mena, Mecca on September 24 has now reached 131, and another 85 are injured. 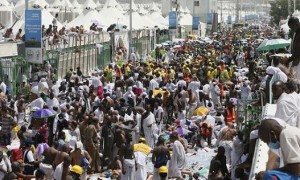 The Mehr News Agency reports that over three hundred Iranian pilgrims who were in Mena are still missing.

The head of Iran’s pilgrim organization announced that the 85 Iranians injured in Mena are being treated in Saudi hospitals and the bodies of the dead will be transported to Iran on Monday September 28.

Before leaving for New York to attend the Security Council meeting, the Iranian president issued an order charging a government delegation to investigate the incident in Mena.

Iran’s Supreme Leader has severely criticized Saudi Arabia for its “poor management” of the Muslim rituals of pilgrimage.

Saudi Arabia has blamed “the high number of pilgrims” and their “lack of compliance with order” as the cause of the tragedy. Saudi authorities are also reportedly investigating the incident.

Overcrowding on the streets among the tents in Mena, Mecca led to a stampede on September 24 that killed more than 700 pilgrims and injured more than 1,000.

Muslims from all over the world are currently in Saudi Arabia to participate in the annual Haj rituals.