More than 700 pilgrims were killed during pilgrimage ceremonies in Mina outside of Mecca, and reports indicate that the death toll is rising. 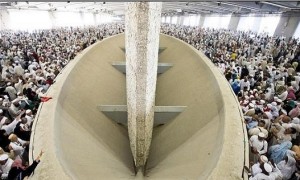 More than 800 people have been injured, Saudi officials announced on September 24, according to Al-Jazeera.

At Mina, the pilgrims carry out the symbolic ritual of stoning the devil by throwing rocks against a wall. There are 160,000 tents at Mina, where pilgrims spend the night following the ritual. A stampede in one of the streets between the tents led to the deaths and injuries.

Iranian authorities have confirmed 43 Iranian nationals were among the fatalities.

More than two million pilgrims are in Saudi Arabia for the annual Haj pilgrimage ritual. The ceremonies have already been weighed down by a crane that fell at the al-Haram Mosque during another ritual, which led to the death of more than 100 pilgrims.