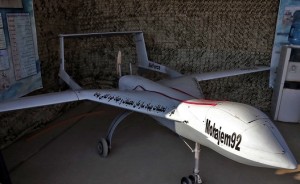 Tasnim website reports that the drone, Mohajem 9 was put on display at the Mehrabad Achievements Exhibition for Islamic Republic of Iran Air Force in time for the anniversary of the “Holy Defence” (Iran-Iraq War).

The Unmanned Aerial Vehicle (UAV) introduced at the exhibition is reportedly capable of travelling for six hours reaching top speed of 200 kilometres per hour at sea level and 120 kilometers per hour on cruise.

Iran’s Air Force has engaged in domestically manufacturing light and heavy weapons and military equipment since 1992.