The Semnan Regional Water Company is “secretly” exploiting Abr Forest to transfer water from Golestan Province to Shahroud, according to environmental protesters, who say they will take matters into their own hands if the government does not stop the water extraction activities. 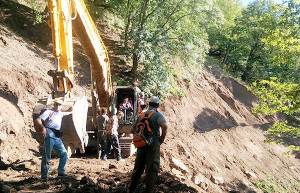 Abr Forest, 50 kilometres from Shahroud, encompasses some of the oldest Hircanian forests in the country with numerous unique wildlife.

The Etemad daily reports that the company is attempting to create a pipeline to draw water from Zarin Springs in Golestan to Shahroud.

Similar attempts last summer were halted by the Department of the Environment. However, reports indicate that the forests continue to be exploited, which has triggered protests by Golestan citizens.

The citizens, who have formed a committee, maintain that according to the Ministry of Power and the meteorological organization, Shahroud has no problem providing drinking water to its residents. They maintain that the water being drawn is targeted for agricultural purposes in areas where agricultural development is not feasible and has not been traditionally practiced. Meanwhile, the committee maintains, Golestan farmers who have been engaged in farming for generations are being left without adequate water resources.

Many regions of Iran have been facing water shortages for a number of years due to continued drought and mismanagement of water resources.