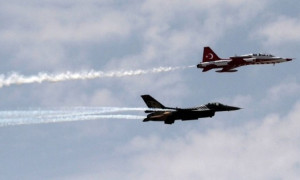 Reuters reports that Turkish fighter jets bombed a base in Diyarbekr regarded as a PKK base on the night of Friday September 19.

Meanwhile, an anti-government demonstration last week in Ankara organized by leftist groups under the banner of “peace” was stopped by Turkish Police.