Workforce participation much lower for women

The most recent statistics reveal that the Iranian labour market is predominantly occupied by men, and for every 5.31 men who have jobs, only one woman is employed. 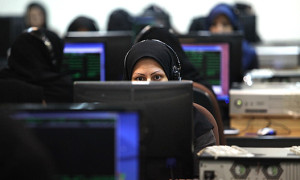 Statistics also reveal that for every woman looking for work, there are 2.2 men doing the same. However, analysts believe that educated women are so disappointed in the job market that they merely refer to themselves as homemakers in surveys rather than look for work.

Shahindokht Molaverdi, the Iranian president’s adviser on Women and Family Affairs, reported this week that unemployment among women with higher education is now at 40 percent.

Analysts report that whenever the job market faces a crisis, women are affected first and foremost.