Iran’s Supreme Leader has appointed the members of the Supreme Council of Virtual Space for a four-year period. The council’s duties include guarding against the unrestricted flow of information on the internet and creating a National Internet (Intranet). 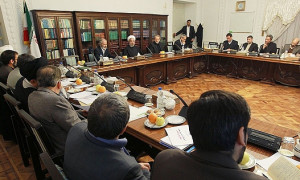 Iranian media report that Ayatollah Khamenei has appointed the members of the Supreme Council of Virtual Space, and all other bodies “working parallel to this council” will be dissolved accordingly.

Ayatollah Khamenei has called on the council members to launch the National Internet as soon as possible and “to draft and finalize the security, legal, judicial and enforcement system needed for virtual space”.

“Purifying and protecting the security of the country’s virtual space” and “promoting the Islamic way of life” are among the 10 priorities communicated to the appointed members of the council.

The order to establish a council to oversee virtual space was issued four years ago by Ayatollah Khamenei; however, since the Rohani administration took power, activities in this regard have been halted. The administration’s refusal to continue the activities of the Supreme Council of Virtual Space drew fire from the Prosecutor General and the head of the country’s security forces.