Ali Larijani, the speaker of the Iranian Parliament, says a project to transfer water from Georgia to Iran is part of a “a general plan to expand economic relations between the two countries”. 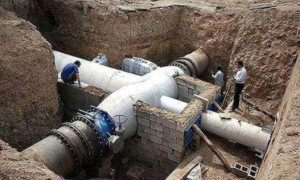 Larijani, who met with his Georgian counterpart while visiting New York, said on Wednesday September 3 that water transferred from Georgia could be the answer to saving Lake Urmia, the country’s largest inland lake, which has been rapidly drying out in recent years.

Over ninety percent of Lake Urmia is said to have disappeared, with severe consequences for the region.

Georgia is interested in entering the water-transfer deal with Iran in view of its own plentiful water resources.

Iran’s Minister of Power previously had revealed that the ministry was engaged in negotiations to transfer water from neighbouring countries.

Iran is facing a water crisis due to years of consecutive drought and the overuse of its underground water resources.