The Swiss Department of Foreign Affairs has apologized for the use of a cartoon of Benjamin Netanyahu by the Swiss Ambassador during a conference in Zurich. 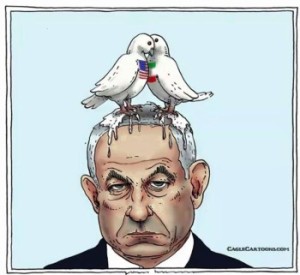 The cartoon, which shows two doves bearing the flags of Iran and the United States while defecating on the head of Israeli Prime Minister Benjamin Netanyahu, was displayed on a large screen on Thursday August 27 during Ambassador Giulio Haas’ speech to hundreds of Swiss and Iranian business people at a Zurich event promoting trade between the two countries.

Reuters reports that in a statement, the Swiss government said that it “regrets the use of this cartoon and considers it tasteless.” The statement reportedly goes on to add that the ambassador did not intend to offend anyone and “if that is the case, however, he regrets it and seeks the pardon of everyone who could have felt insulted.”

Reuters adds that in his speech, Giulio Haas referred to Iran as a “pole of stability in a very, very unsafe region”.

The cartoon appears to refer to the nuclear agreement reached in July between Iran and the 5+1, which aims to lift international sanctions on Iran in exchange for curbs on Iran’s nuclear activities. While the deal has yet to be approved by the U.S. Congress, U.S. President Barack Obama has said that he will veto any adverse decision by the government body.

Switzerland has already lifted some of its sanctions against Iran.