The Romeshgan Forests in Lorestan Province have been on fire since Sunday and continue to burn amid unsuccessful attempts to put them out. 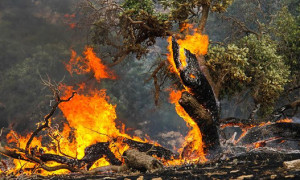 Winds have been feeding the fires and difficult terrain has seriously challenged efforts to suppress the fire.

Officials say they suspect the fire was caused by people.

Reports indicate that local environmental groups and local residents are assisting government efforts to put out the fires.

Forest fires have destroyed 1,800 hectares of forest this year in Lorestan compared to 580 hectares last year.

Official reports indicate that forest fires have increased by 40 percent this year, with Fars, Khuzestan, Lorestan, Kordestan, Kohgiloyeh, Kerman and Golestan provinces having the highest number of fires.