The Tehran police department has announced that the protesters arrested at the reopening of the British Embassy in Tehran have now been released. 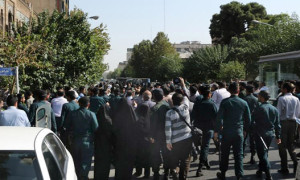 IRNA reports that according to the police, there was a group of arbitrary protesters who refused to follow police directions.

Reports from Tehran indicate that four students from Amir Kabir University were arrested during a protest at the reopening of the British embassy in Tehran on Sunday August 23.

The British Embassy was closed four years ago after a group of protesters, who objected to Britain’s support for international sanctions against Iran, stormed the building, broke its windows and burned some documents.

Following the nuclear agreement reached in July in Vienna, European countries have been busy re-establishing relations with Iran.

the British Embassy was reopened on Sunday in the presence of the British Foreign Minister Phillip Hammond to restore diplomatic relations at the charge d’affaires level.