Migrants held behind barriers at the Macedonian border managed to jostle their way through on Saturday night and break the police barrier. 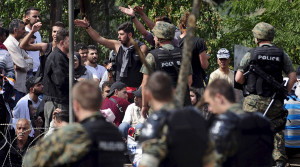 The Associated Press reports that when the police were trying to let a handful of the asylum seekers through, thousands of migrants rushed toward the barrier to enter Macedonian territory.

The Macedonian police reportedly responded with stun grenades, which injured scores of people including women and children.

Twenty-five of the wounded were taken to a train station by the other asylum seekers, and many children have reportedly been separated from their families and lost.

The report adds that the migrants are trying to reach Hungary, which is an EU member state.

Macedonia has been overwhelmed by the wave of migrants and closed its border on Thursday.

The migrants are mostly Syrian asylum seekers who are in limbo in Turkey and are trying to reach EU countries.