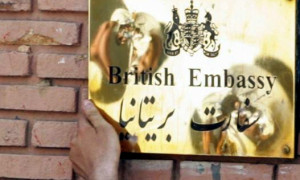 The report indicates that only 10 countries have been officially informed of the opening: six Arab Persian Gulf states and the U.S., France, Germany and Iran.

British Foreign Minister Philip Hammond will reportedly be present at the opening and Iran will also increase its diplomatic presence in Britain.
British media and officials are reportedly set to announce the opening on Saturday.

The British Embassy was shut down in 2011 following a protest in front of the building against British support for international sanctions on the country.